It’s footy season, which means we’re starting to see the dreaded hamstring injury more and more in the clinic! But what are they, and what can we do about them?

Hamstring strains are very common in sports such as AFL, Soccer, Cricket and Hockey. They are actually the most common injury in the AFL, constituting 15% of all injuries. Six players from your favourite team are likely to have a hamstring strain this season!

What are Hamstring strains?!

The most common hamstring strain is a type 1 injury. These are most commonly injured when the  athlete is sprinting, especially when fatigued. There is a tearing of the muscle belly of the hamstring and sometimes tendon involvement.  You’ll often see a footy player running at full speed, suddenly stopping looking like they’ve been shot in the leg.  They will then hobble to the bench and you’ll see them 10 minutes later with an ice pack taped to their leg! Day Done!

But how long will the injury take to heal?!

What can I do about it?!

The initial period after a hamstring strain utilises the RICE program. Rest, Ice, Compression and Elevation. This is combined with gentle, pain free movements for the hamstring. It is important to keep the hamstring moving in the early stages!

After the early stages, strengthening needs to begin. A lot of athletes may have multiple reoccurrences because the pain will settle before the hamstring is back to full strength again. If they return to sport too early this increases the chance  of a reoccurrence.

During the rehab process your physio may place emphasis on eccentric strength training. This means strengthening the muscles whilst the fibres are lengthening, which has been shown to reduce the  reoccurrence of strains. Exercises such as single leg Romanian deadlifts, nordic drops and single leg ball roll outs could all be used in an overall rehab program.

When can I return to play?!

This is tricky! Coming back too early can result in a reoccurrence and more time on the sideline! You need to have undergone a running program and a return to full training for a week before playing. There is also a number of tests that your physio will take you through before giving you the all clear to return to sport.

The pain will disappear before you return to play! Don’t make the mistake of returning to sport without a structured strengthening program.

Don’t just focus on the hamstring, you need to get your glutes, quads and balance working too!

See one of our fantastic physiotherapists to assess, diagnose and treat your hamstring strain for the best chance at a successful return to sport! 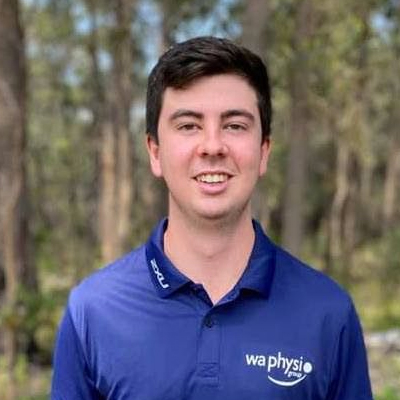 Prior to joining our team, Lincoln was working as a mobile physiotherapist doing home visits throughout the Hills area. He believes in an active approach when treating, encouraging people to take ownership of their condition and achieving their individualised goals through simple, yet effective treatment plans.

He is also a fully qualified Pilates instructor having completed his training at our Midland clinic.

Having grown up locally, Lincoln is already an active member of the community and is the head coach of Glen Forrest Tennis Club. You will often see him at the courts after work or on weekends, either coaching or playing matches!